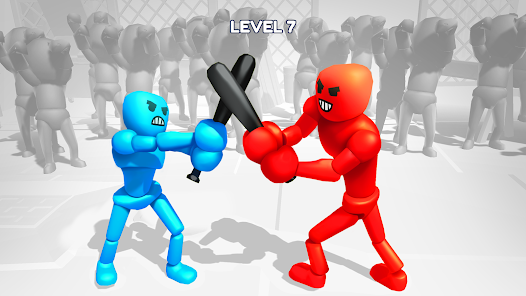 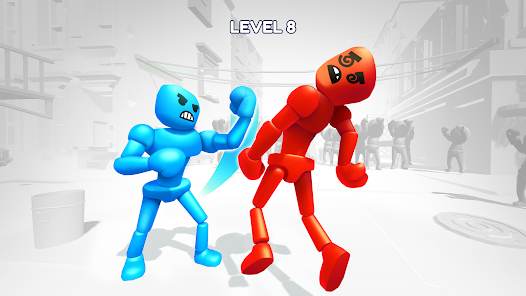 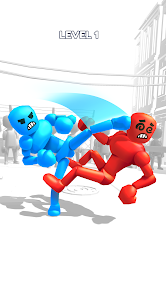 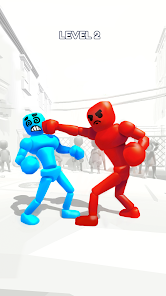 The gameplay of this game revolves around fighting an opponent at different locations. On several levels of the game, the fight will take place on the streets or in a ring. Both settings have an audience that is cheering on their favorite fighter.

To win the game, the player has to fight using fast and impactful techniques. Otherwise, your opponent will be faster than you are and knock you out! When launching the game, you should be ready for battle. If you are unable to learn how to control the stickman while fighting, you should ensure that you improve gradually. Unless you do this, you will become a regular loser and chances are that you will not be enjoying the game. Download the Stickman Ragdoll Fighter game, improve your fighting skills and survive the fights!

Stick to the Battle, Survive!

The team at Casual Azur Games created the game with minimalist yet stimulating graphics. Additionally, the game has smoothly animated moves that make watching the action a cool thing. If you are a fanatic of fighting games, this is a game that you should have. You will not want to stop once you start paying the Stickman Ragdoll Fighter game. If gaining victory against your opponent proves futile, improve your fighting skills and become a powerful stickman battle superhero.

Install the Stickman Ragdoll Fighter game now and furiously get your hands on your opponent. Make the gameplay interesting and memorable! The gamer plays the role of a real stickman and has to defeat the opponent stickman through special combat skills. To make more improvements to your fighting skills, the game allows you to collect coins that you can later use in purchasing different skins and combat items. Download this amazing game, play the role of a fighting warrior and win battles with the best moves!

This is one of the most amassing games released in 2019. Various features will make you want to play the game now. To shed a light, we have compiled some of the features that make Stickman Ragdoll Fighter stand out among other games in its genre.

Amazing Graphics & Smooth Animations – the minimalist graphics used to create this game cannot go unnoticed. The game offers realistic animations and amazing graphics. You can easily see the reactions of characters once hit. Different impacts from knocks result in various reactions of the characters. At one point, you can even see a character bleeding after being hit with a sharp weapon. In the background of the setting, you can see the crowd/audience cheering on their favorite fighter during gameplay. There are no complaints of the action in the game being sluggish.

Simple Controls – Stickman Ragdoll Fighter has a very simple interface that makes playing the game easy to play on an Android device. After launching the game, you will notice a joystick on the bottom right side of the screen. You should use this joystick to move your hero. You should move the battle hero close to the opponent to start the fight. Move near objects and weapons to collect and use them against your opponent. In the same breath, you should tap the screen receptively to hit or knock out the opponent. An auto-tapping application can come in handy for the action in this game.

Challenging Missions – although there is only one primary mission in this game – fighting for survival, there different levels of the game that present various challenges. You need to complete the mission of beating the hell out of your opponent with all you got. To win in various levels easily, perfect your fighting skills, stunts, and combat moves. Be keen to keep your eyes on your enemy. Otherwise, you will be the one knocked out! Besides, you should try to keep your energy and weapons upgraded. Get the game now and enjoy disseminating your opponents regardless of the challenging missions.

Active Stickman Battles – in the Stickman Ragdoll Fighter game, you keep with your opponents to beat ‘em all without mercy! You enjoy real-time battles with legendary fighters who are ready to kick and finish you. If you want to engage in active battles, collect weapons and grow your fighting skills. Beat your opponent to death and win the various missions. Most importantly, make tricky moves with your stickman character and become the fighter champion in many ragdoll fights.

If you want to engage in an intriguing fighting game, download the Mod APK of the Stickman Ragdoll Fighter game now. This Clash Royale Mod APK will make you the best fighter warrior!

OTHER FIGHTING GAMES ARE: